The University of California Riverside (UCR) through its UCR EPIC program, together with its partner Eurosemillas, are launching the UCR EPIC-Eurosemillas Incubation Challenge to support deep technology-based startup companies from Latin America (LATAM) in the exploration of opportunities to commercialize their innovations in the US Market.  The Challenge is a response to the needs of entrepreneurs in the Latin American region as confirmed by UCR’s survey of incubators, accelerators and technology transfer offices discussed in a recent white paper.

UCR, through its UCR EPIC program, has a long history of collaborating with Latin American inventors on several initiatives in addition to its online platform COMUNITT (www.comunitt.org), developed in partnership with the Organization of American States. UCR has delivered training and mentorship to over 100 Latin American inventors using the customer discovery methodology through its INNOVAR Entrepreneurism Training program. Additionally six (6) Latin American startups have been incubated to date by the UCR team with the goal of penetrating the US market. 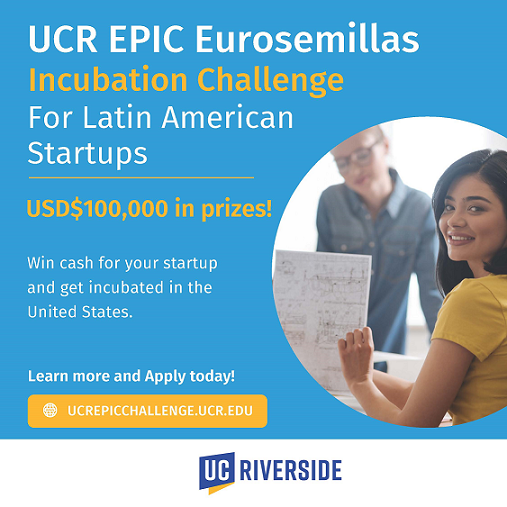 Thanks to the sponsorship from Eurosemillas and UCR, 6 LATAM startups will be selected by a panel of experts to receive a combined total of USD$100,000 in cash and commercialization assistance from expert Entrepreneurs-in-Residence from UCR EPIC. One winner will receive: USD$40,000 cash to use toward advancing commercialization, a trip to Riverside California for intensive mentoring and networking, and up to 150 hours of expert mentoring and support from the UCR EPIC International Incubation team to explore penetration of the US market.

Five finalists will each receive 30 hours of expert mentoring by UCR Entrepreneurs-in-Residence to help prepare a pitch deck to raise money in the US and build connections in the US.

The challenge invites founders or key members of a tech-based LATAM startup working on a field related to sustainability in the areas of agriculture technology, renewable energy and fuels, and sustainable transportation among others, to apply by December 1, 2022.

UCR has partnered with over 30 Latin American incubators, accelerators, and university allies in Latin America to reach entrepreneurs in the region and generate awareness about this opportunity to advance regional technologies.  Additional information about the challenge can be found on the contest website http://ucrepicchallenge.ucr.edu